The Fed lowered the dollar, but the pound also suffered from its own problems. As the page turns in June, cable is at a crossroads, and the all-important US employment reports can serve as a tiebreaker. UK covid developments and other events are also at play.

This week in GBP / USD: Ugly contest between dollar and pound

Stick to the script: A long list of Federal Reserve officials took to the stage, repeating the same message: Rising inflation is transitory and the economy still has a long way to go. Fed heavyweight governors Lael Brainard and Randal Quarles were joined by Esther George. Usually a hawk, the latter agreed with the other members that the bank is ready to continue buying bonds at the current rate of $ 120 billion / month, dismissing any talk of the cut. This position depressed the dollar.

New economic figures confirmed the Fed’s position with several failures. The Conference Board’s consumer confidence stood at 117.2 in May, below expectations. The housing sector – which looked hot – has shown signs of slowing down, as evidenced by new home sales and other data.

However, while the EUR / USD hit its highest level since January, the GBP / USD struggled to advance due to the Rapid spread of COVID-19 variant first detected in India. While studies have shown that existing vaccines are effective against these strains, and numbers remain low, the creeping increase in cases is cause for concern.

British Prime Minister Boris Johnson said there was a continued concern about the variant, and Germany announced restrictions for travelers from Britain. The virus graph is increasing once again.

Brexit: The UK and the EU remain at odds over the Northern Irish protocol, a component of Britain’s exit from the bloc that remains a point of contention. London and Brussels have yet to resolve other issues such as regulating the service sector – and that has weighed on the pound as well.

An event that grabbed the headlines but failed to stir the pound was Dominic cummings“Explosive evidence in parliament. The former senior adviser to the prime minister has turned the tide on the government’s alleged incompetence in handling the pandemic. Nonetheless, Johnson’s Tories appear stable as the public focuses on exiting the crisis rather than its worst days.

Events in UK: vaccine against variant once again

Will variant B.1.167.2 stop Britain’s reopening? This is the crucial question for the UK economy. While activity in the UK is already much higher compared to winter, fears about the last stage of the return to normal have risen alongside cases of COVID-19.

Vaccines have been shown to be effective against this strain first identified in India, but reaching as many people with both doses has become more important. Investors want these charts to rise even faster: 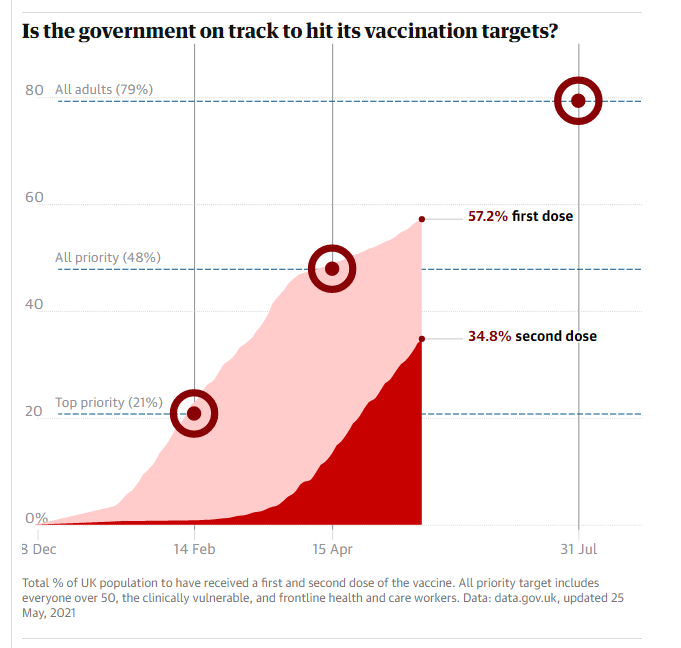 Prime Minister Johnson will likely weather the recent political storm around Cummings’ testimony, despite the explosive revelations. However, optimism about the recovery may be undermined by lingering Brexit issues. The EU and UK remain at odds with the NI protocol and other issues. If the subject remains on the back burner, the pound would have room for maneuver, but any resurgence of acrimony could weigh on the pound.

Markit’s final purchasing managers’ indices (PMIs) for May are interesting, but the Governor of the Bank of England Andrew Bailey’s public appearances are more important. Bailey is set to provide an updated view of local and global economies and potentially hint at the bank’s next moves. While inflation isn’t hitting the lows, it remains tame.

Here is the list of UK events on the FXStreet calendar:

Events in the United States: Full implementation of non-farm payroll

Half of the American population has received at least one dose of the vaccine, and 40% are fully immune to COVID-19. Is it sufficient? The campaign has depressed coronavirus cases, hospitalizations and deaths, but the recent slowdown means the elusive “herd immunity” has been pushed back.

Any increase in cases or further slowing in inoculations could weigh on sentiment.

Advances in vaccines in the United States: 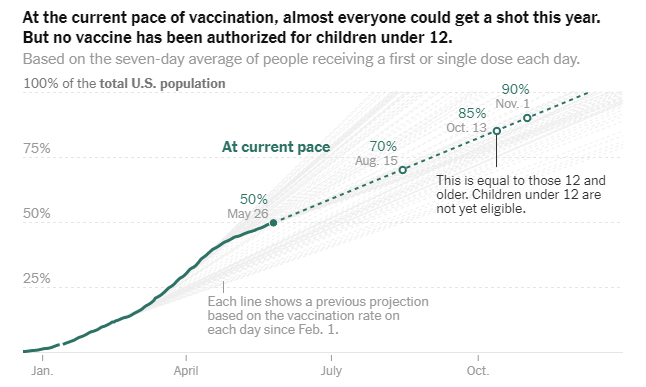 Will the new month bring Democrats and Republicans closer to a deal on infrastructure spending? President Joe Biden and his team have worked with the GOP to reach a deal, but he can still go it alone if the gaps remain wide.

The focus is on the busy economic calendar, peaking in non-farm payroll figures. The ISM Manufacturing PMI starts the week and is expected to remain at an all-time high above 60 points, reflecting rapid expansion.

Its employment component serves as an index for the employment report. Particular attention will also be devoted to the PMI inflation figure, which is expected to cool from highs.

ADP’s private sector employment figures are expected to show slower employment growth in May. Any significant surprises could shape expectations for the official jobs report, despite the decrease in the correlation between the two numbers. The ISM Services PMI is the latest index, and here too the employment component will be closely watched.

Was the disappointing increase of 266,000 jobs in April one-off? Economists expect the May NFP to post more than 600,000 jobs earned, reflecting a quick return to normal. The revisions to the previous figures are also interesting.

About eight million Americans have yet to regain their pre-pandemic positions, and an acceleration of the return to work would raise expectations of a tightening and rising dollar. Changes in the unemployment rate are highly dependent on the participation rate and are ignored by investors.

Here are the main events coming to the United States this week: 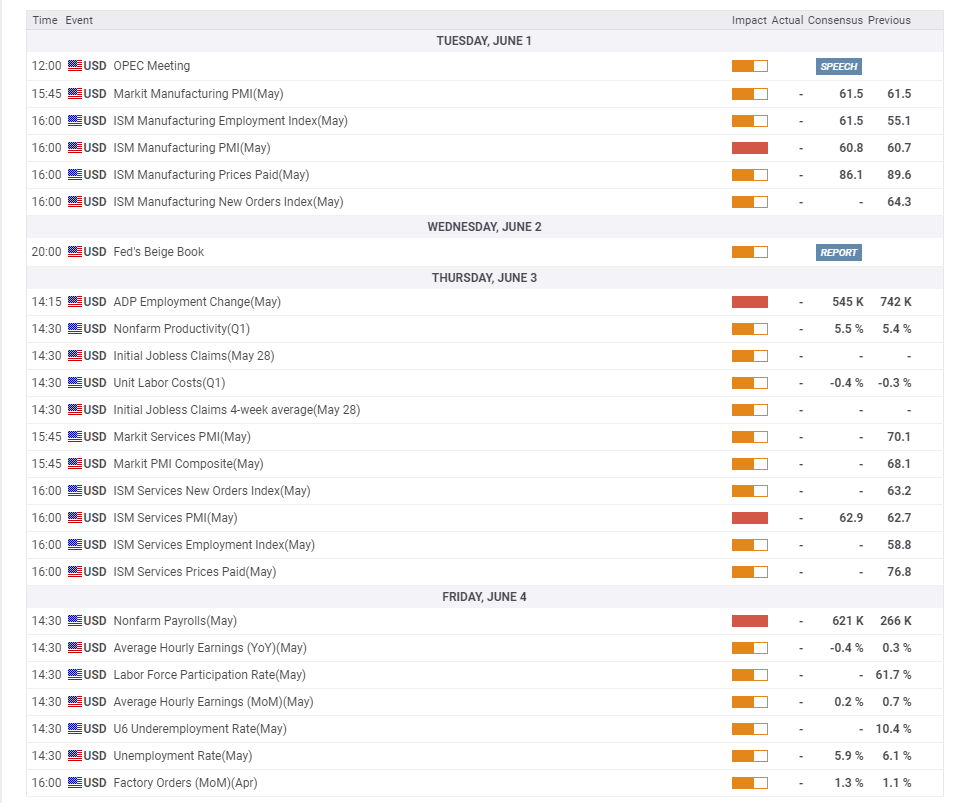 The pound / dollar remains in an uptrend despite failing to break through the annual high of 1.4240. The currency pair has never looked back at 1.4010 after crossing that line in early May, and it is trading above 50-day, 100-day and 200-day Simple Moving Averages (SMAs). Momentum remains on the rise and the Relative Strength Index (RSI) is below 70 – outside of overbought conditions. Overall, bulls are in control. 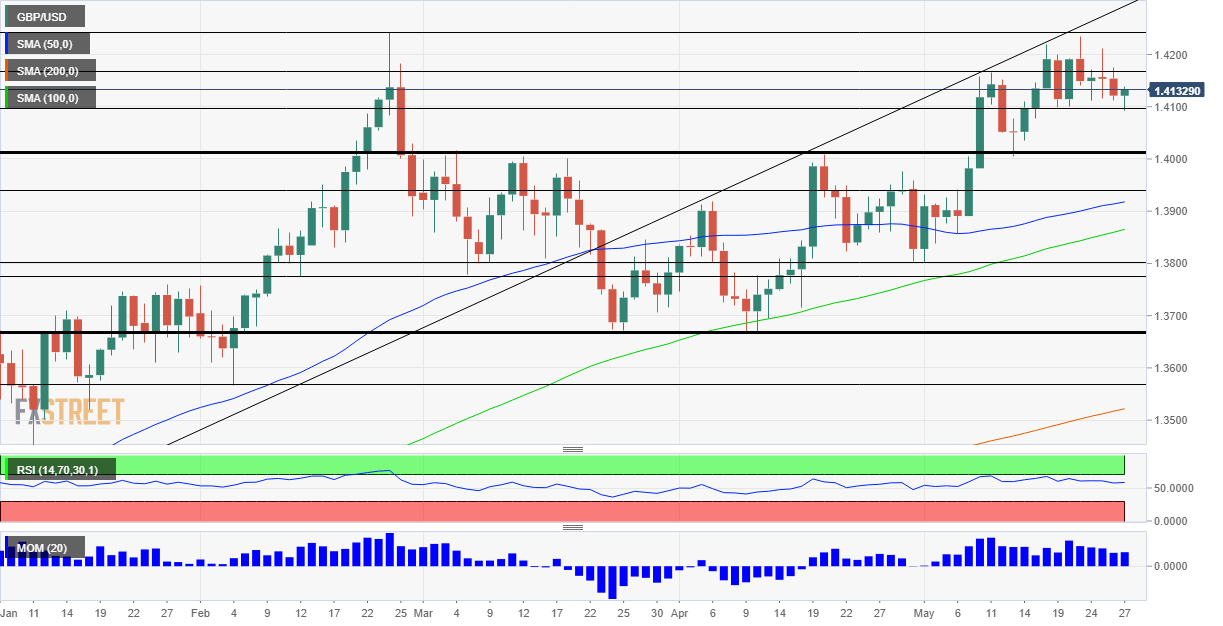 The US economy is booming and May’s non-farm payroll will likely allay any doubts – paving the way for the Fed to increase its slap banging rhetoric. With lingering fears of the virus variants, the pound could suffer. Overall there is room for the falls.

the FXStreet Forecast Survey shows that experts are bearish on all time frames. However, the long-term goal is higher than the medium-term goal. In addition, the average goals are not very far from each other. 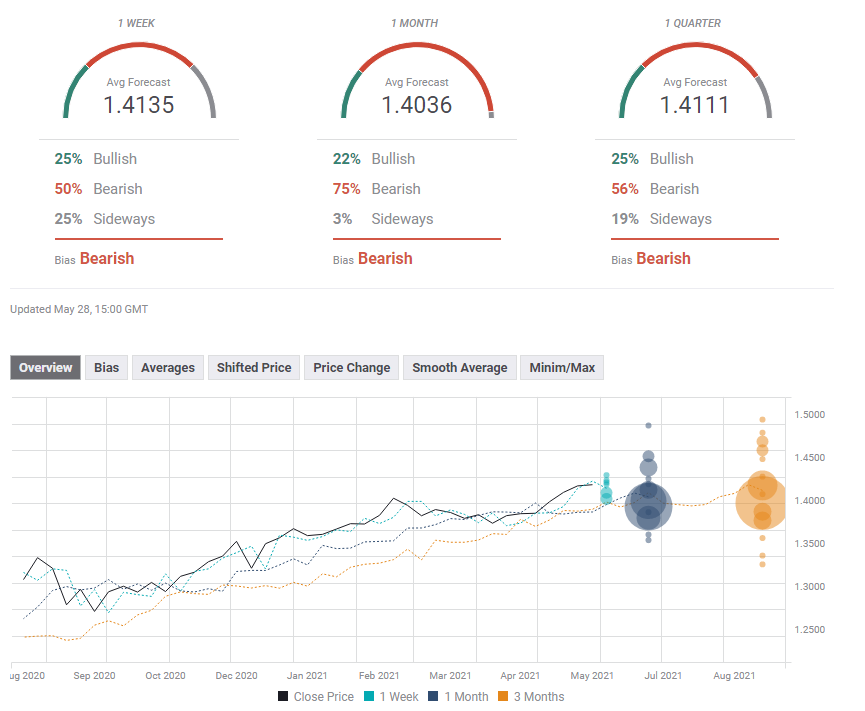 Is the increase in the volume of ...